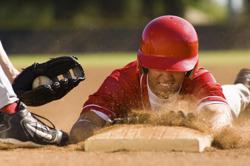 Delwood is part of PONY Baseball. PONY stands for Protect Our Nation’s Youth, and is dedicated to a safety-first, fundamentally-sound, and challenging game for children of all age levels. PONY scales up the rules and field sizes and children get older, allowing them to play as close to “real” baseball as possible, while maintaining a safe structure for their physical abilities.

Delwood has leagues for boys and girls aged 4 through 14.  Don't worry if your kid has never played before. There are many kids at every level that will be trying baseball out for the first time this season, so your child will not be the only rookie on the field.

Generally, leagues are offered by age group, with two grade levels playing together. But, PONY has strict rules about age cutoffs for its leagues related to birthdate, not grade level, so the guidelines below are just that. You should consult the  PONY Age Chart to determine the actual level your child falls within.

Below is a summary of each league and the its rules and style of play. It is meant to be a general guide, but does not govern play. For a deeper dive into the rules, please consult the PONY Rule Book.

Shetland (6U Tee ball, Pre-K & K) – This level is tee ball, with a softer, lighter ball than a “real” baseball. The teams play with four outfielders, and so there are 10 players on the field when playing defense. All players on the roster bat, regardless of whether they are playing the field. There is no leading off or stealing allowed and there is a five run limit per inning. Coaches will be on the field with the players to help them understand where to go and what to do. This level is really more about getting children on the field and learning the very basics of baseball in a fun environment than anything else.

Pinto (8U Coach Pitch - 1st & 2nd) – At this level, the players will be hitting balls pitched to them by their own coach. Your child’s team coach will pitch to them when your child’s team is batting, and vice versa. The players can strike out, but cannot walk, given that their own coach is pitching. Generally, a player gets either three strikes, or six pitches to hit the ball. If, on the sixth pitch, the player does not swing or misses, the player is out. If there is a foul ball, another pitch is given. Some leagues use a five-pitch rule, the umpire will discuss the rules with the coach before the game so everyone is on the same page. Leadoffs and steals are not allowed, players must stay on the base until the ball is hit. Usually there are three outfielders, although by agreement sometimes there may be four. The entire roster hits regardless of playing in the field. There is a five runs per inning limit.

Mustang (10U Kid Pitch - 3rd & 4th) – At this level, the players will be pitching and there will not be any coaches on the field. This level is more like “real” baseball. Runners are allowed to lead off and steal bases, pitchers can pick off runners, and can be charged with balks. Players will strike out on three strikes and will walk with four balls. The field size is the same as the Pinto field (46 feet between pitchers mound and home plate and 60 feet between bases). There will only be three outfielders. There is a five run per inning limit. The whole roster will bat, except some tournaments may have different rules requiring the fielders to bat only.

Bronco (12U - 5th & 6th) – At this level baseball rules apply. The bases and pitching distances are larger than the Mustang field, but smaller than a high school field.

Pony (14U - 7th & 8th) – At this level baseball rules apply. The bases and pitching distances are larger than the Bronco field, but smaller than a high school field.

Equipment Requirements: PONY requires that all age groups use a USA Baseball approved bat. There are exceptions, but that is the general rule. The Pony Rule Book goes into more detail regarding bat requirements. You are not required to buy your child a bat, but if you do, make sure it is approved for PONY baseball so your child can use it.

Your child will also need a glove, and baseball cleats are recommended, although not required. You also free to buy your child their own batting helmet, although we also have extras they can use if they do not have one of their own.

Season Length: Generally, the Spring season will start towards the second half of February with practices and the first games start after Spring Break and run until the end of May. The Fall season will start after Labor Day with  games beginning in late September and running to mid November. Both seasons are approximately 12 games long, with 1-3 tournaments.

Interested in becoming a sponsor of Delwood and youth sports in East Austin?

Read more at the Friends of Delwood Sports website.

Could your business sponsor us?